Quick guide for students by Ellen Sexton. esexton [at] jjay.cuny.edu

Find books and ebooks in OneSearch

How to find books in OneSearch

Finding a book in OneSearch, step by step

You can search by ISBN in OneSearch Advanced Search by selecting ISBN from the "Any Field" dropdown menu. But it's best to search by title. Different editions of the book might have different ISBNs.

If you can't find the book in OneSearch, you can click the "All CUNY" option at the top of the page to see if any other CUNY library has it. If they do, you can try requesting the book using the Request button. (More info on intra-CUNY borrowing.) If no library at CUNY has the book, try searching for it in public libraries.

When searching the catalog OneSearch, for print format books, please note both call number and the location. We have more books in electronic format that in print.

Stacks: the main circulating collection of the library. On the north side of the library: call numbers A–H are on the upper level; call numbers J–Z are on the lower level. Stacks books can be borrowed for 4 weeks by undergraduates and staff, 6 weeks by masters students, and 8 weeks by doctoral students and faculty. They can be renewed through My Account / Sign In in OneSearch.

Reserve: books kept behind the Reserve Desk on the lower floor. Most can be used only within the library. More info »

Law Reference: upper level of the library, towards 58th street. Not circulating.

Special Collections: upper level of the library. Ask at the Reference Desk. Not circulating.

Once you have narrowed down your topic and come up with the research question your paper will explore, identify the main concepts in your query. Use these concepts as your search terms (keywords).

How does domestic violence affect children?

Does providing employment opportunitities to ex-prisoners reduce the risk they will re-offend (recidivism)?

ex-prisoners and employment and  recidivism

ex-convicts and  employment and  recidivism

formerly incarcerated and employment and recidivism

Perhaps broaden the search to find more about recidivism in general:

How to read a call number

Every book in the library has a unique call number. Think of the call number as the address of the book, in that it tells us where exactly on the shelves we can expect to find the book.   e.g.

Look for the letters first, on the top line:
HA

Then look at the whole number on the next line:
1625

Then look at the letter(s) after the dot:
O

Then look at the decimal number:
87

Last, you will see the year the book was published:
1999 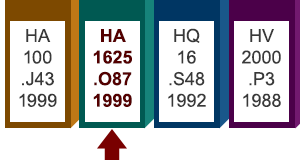 The four books above are in the correct order.

In the Library of Congress Classification system, the letter "H" indicates the social sciences class.
"HA" is the subclass for statistics.

The complete list of classes and subclasses in the Library of Congress Classification scheme is here: http://www.loc.gov/catdir/cpso/lcco/lcco.html

Not everything is digitized! But we do have many ebooks (electronic books). All are listed in OneSearch. All are available remotely — if asked for an ID, use your John Jay email ID and password. Search for ebooks here »

ebrary — Collection of 44,000 ebooks on scholarly subjects.  Covers a range of disciplines, including some science.

FORENSICnetBASE — A searchable collection of over 120 reference books in forensic science and related fields.

Encyclopedias
We have digital encyclopedia collections — see the full list.  One of our most popular collections is the Gale Virtual Reference Library.

See our borrowing and renewing policies »