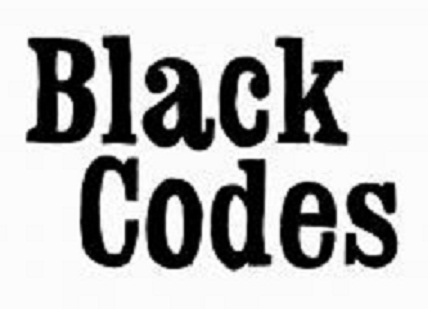 In 1865 and 1866 southern states pass "Black Codes" which were laws to restrict the freedom of Blacks in the region. In the north these codes were viewed as a way to get around the 13th amendment and to allow slavery to exist under a different name. The defining feature of the post-Civil war Black Codes were vagrancy laws which allowed for the newly freed Black population to be arrested and sentenced to hard labor. In 1866 the Radical Republican congress reacted by placing the south under military rule as part of their program of Reconstruction and to pass various laws such as the Civil Rights Act of 1866 and the 14th Amendment. Military reconstruction would last until 1877. 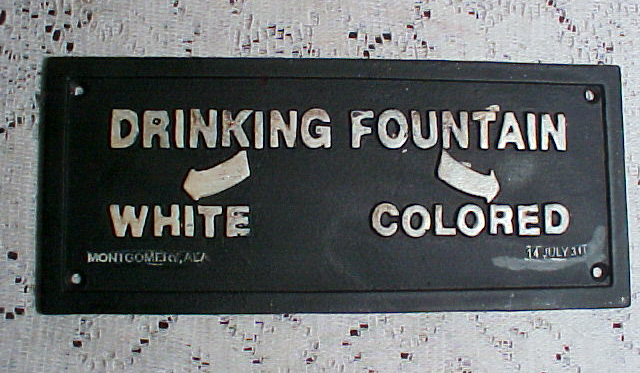 After the end of Reconstruction, racial segregation laws were enacted. These laws became popularly known as Jim Crow laws. They remained in force from the end of Reconstruction in 1877 until 1965. The laws mandated racial segregation as policy in all public facilities in the southern states. The facilities were supposed to be "separate but equal" but in effect were inferior, creating a situation of economic and social disadvantage. In 1913 President Woodrow Wilson extended segregation to the military and to federal workplaces. 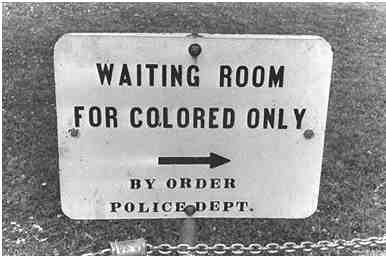 Separate but equal was a legal doctrine that permitted racial segregation. The government allowed for the separation of services, facilities, accommodations, housing, medical care, education, employment, and transportation along racial lines as long as the quality of the services and facilities were equal. Under this legal doctrine racial segregation was not considered a breach of the Fourteenth Amendment. Separate but equal came into force as a result of the Supreme Court decision in Plessy versus Ferguson in 1896. It was overturned by Brown versus the Board of Education in 1954. 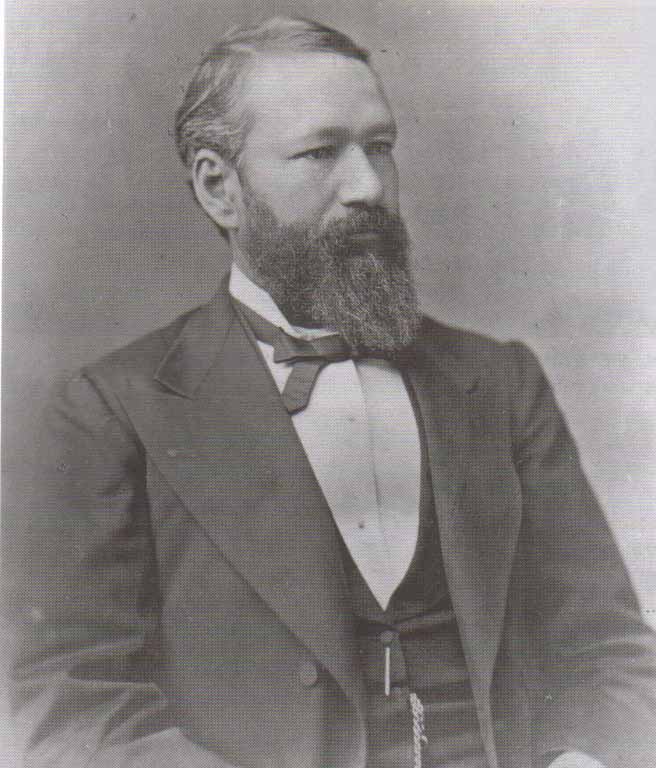 Plessy v. Ferguson (163 U.S. 537 1896) was a Supreme Court decision that legalized the doctrine of racial segregation known as "separate but equal". In the case Homer Plessy argued that his rights to equal treatment under the law under the Reconstruction Amendments (13/14/15th amendments of the Constitution) were violated when he was arrested for riding in a white-only railway car. The Supreme Court voted 7-1 (with one absence due to a death in the family) that Plessy's rights were not violated and laid the foundation for expanding segregation. Plessy versus Ferguson as well as "separate but equal" would remain U.S. law under it was overturned by Brown versus the Board of Education in 1954. 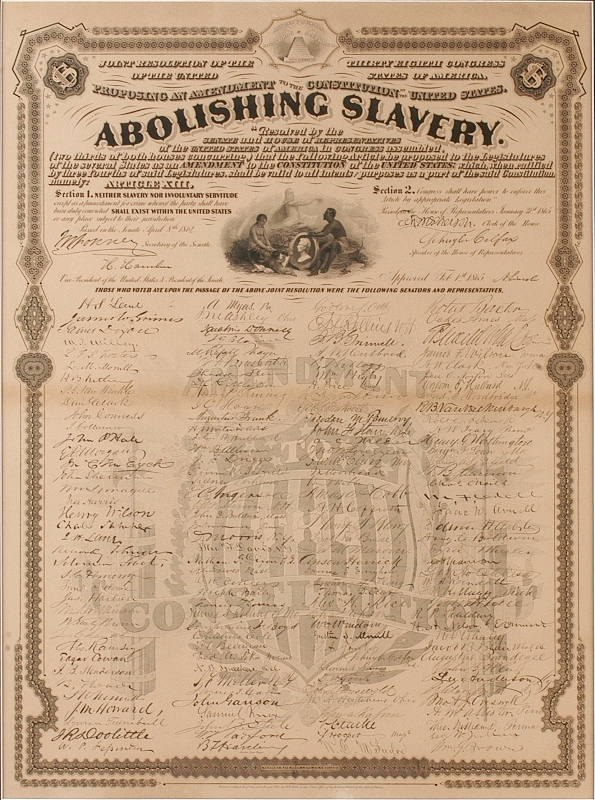 The Fourteenth Amendment of the United States Constitution was adopted in July 1868. The amendment addresses issues of equal protection and due process under the law. The amendment formally defines citizenship in the United States and protects citizens civil rights from being denied by the federal and state governments. Ratification of the amendement was a requirement for readmission into the Union and the amendment itself was bitter contested before it was finally adopted. 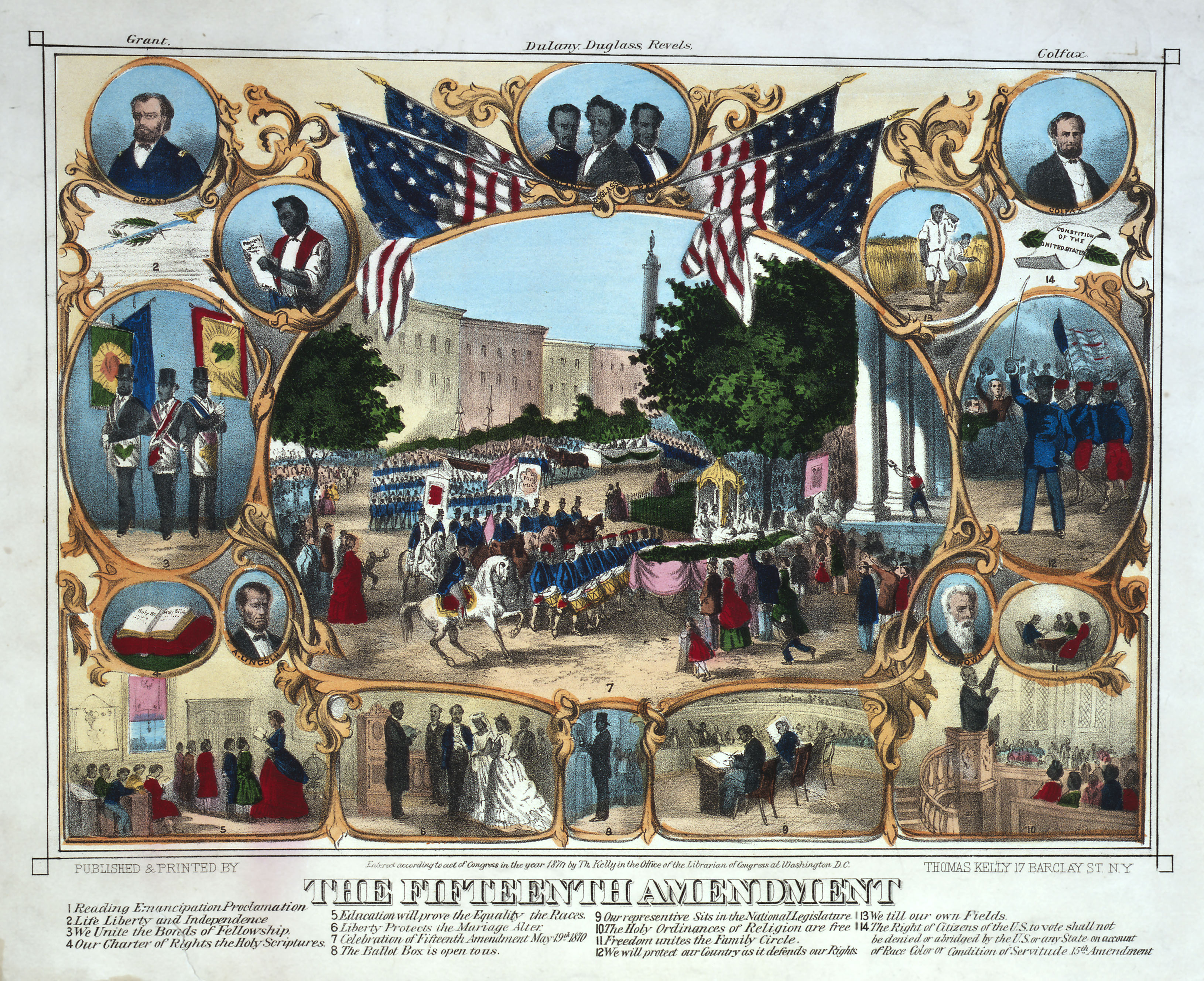 Print Celebrating the Passage of the Fifteenth Amendment in February 1870

The Fifteenth Amendment to the United States Constitution was ratified in February 1870. It prohibits federal and state governments from denying a citizen the right to vote based on race. 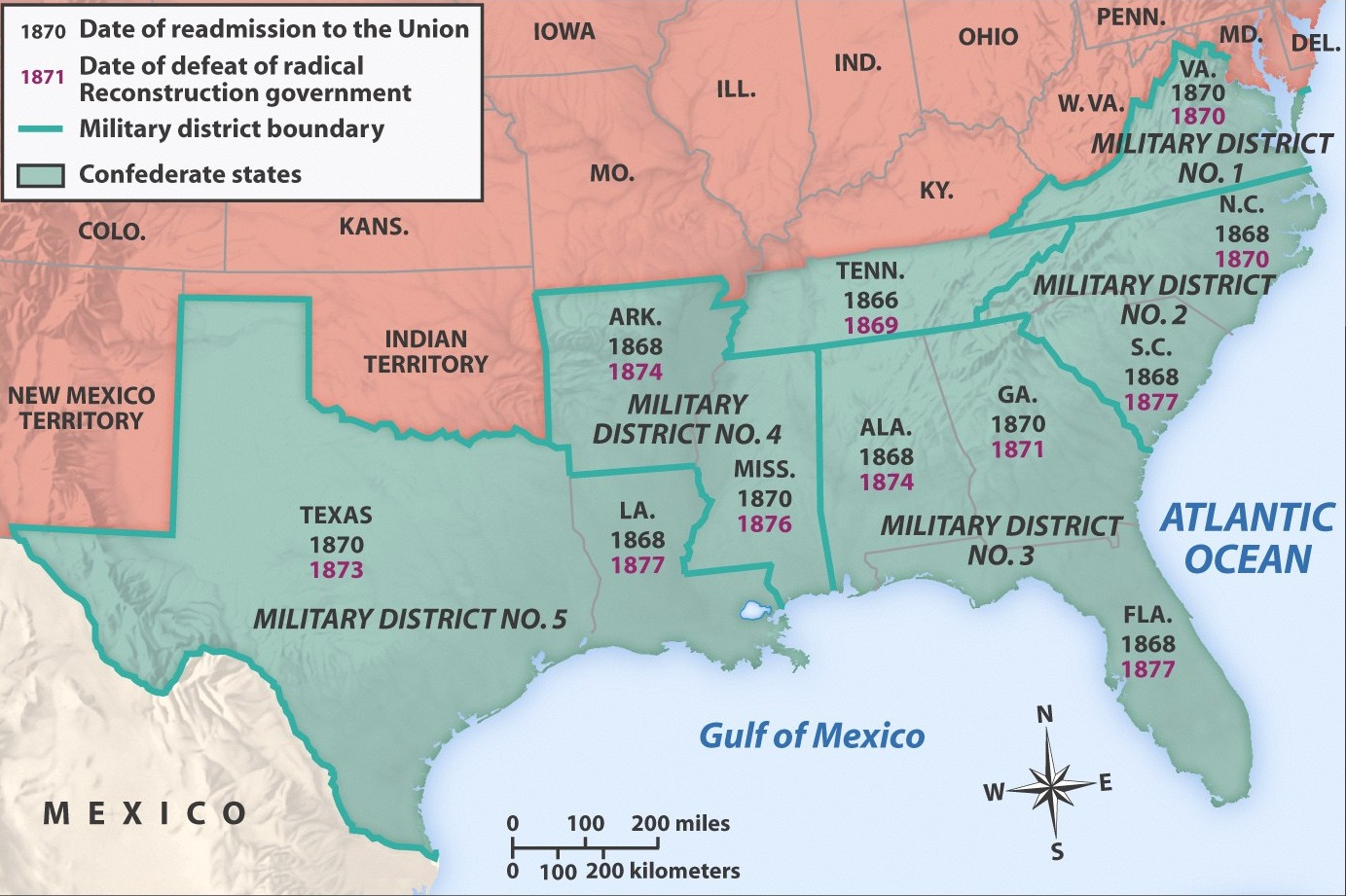 In 1867 Congress passed a variety of Reconstruction Acts that were meant to govern how the former Confederate states would be readmitted to the Union. The south was divided into five military districts. The conditions given for a state to be readmitted to the Union were that an extended loyalty oath be taken before any voter was allowed to register to vote and then that the state in question was required to hold a state level constitutional convention. The convention would specifically have to ratify the 14th amendement as well as a provision that allowed for black men to vote to be allowed to vote.

The Compromise of 1877 was a poltical deal between the two political parties in which Democrats agreed not to object to the election of Republican Rutherford B. Hayes over Democrat Samuel Tilden on the condition that military rule in the remaining three states of the south still under occupation (South Carolina, Florida, and Louisiana) was ended. Hayes removed the troops after becoming President. This marked the formal end of Reconstruction. 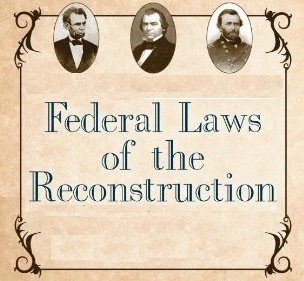 The Enforcement Acts (also refered to as Civil Rights Acts) were three bill passed by the Federal government in 1870 and 1871 that were intended to protect African American rights to vote, hold office, be on juries, and have protection under the law.

The first act in 1870 banned the use of terror, force or bribery to prevent people from voting because of their race, granted equal opportunity for every person despite race to vote, suspended habeas corpus, and enpowered the President to use the army to enforce the act.. The second act in 1871 permitted federal oversight of local and state elections. The third act, known as the Ku Klux Klan Act, made state officials liable in federal court for anyone being deprived of their civil rights or equal protection under the law. 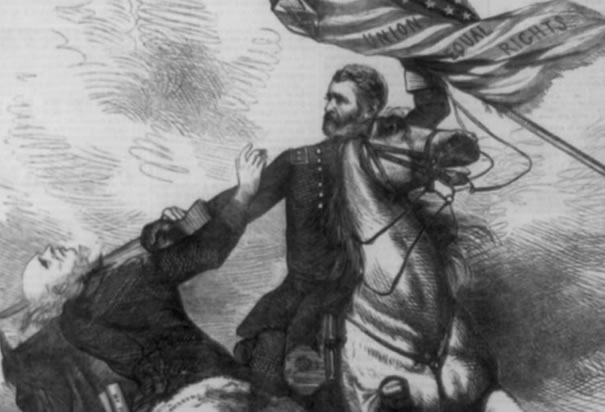 US Grant Attacking the Head of KKK 1871

Following the Civil War as part of the Reconstruction period, various Civil Rights Acts (sometimes called Enforcement Acts) were passed to extend rights of emancipated slaves, prohibit discrimination, and fight violence directed at the newly freed populations. The Act passed in 1871 in particular was intended to combat the Ku Klux Klan specifically by suspending the writ of habeas corrpus. (Habeas corpus is the right to seek to take legal action to seek relief from unlawful imprisonment.) President Grant used the authority granted to him by this act to dismantle the KKK which did not resurface until the beginning of the 20th century. 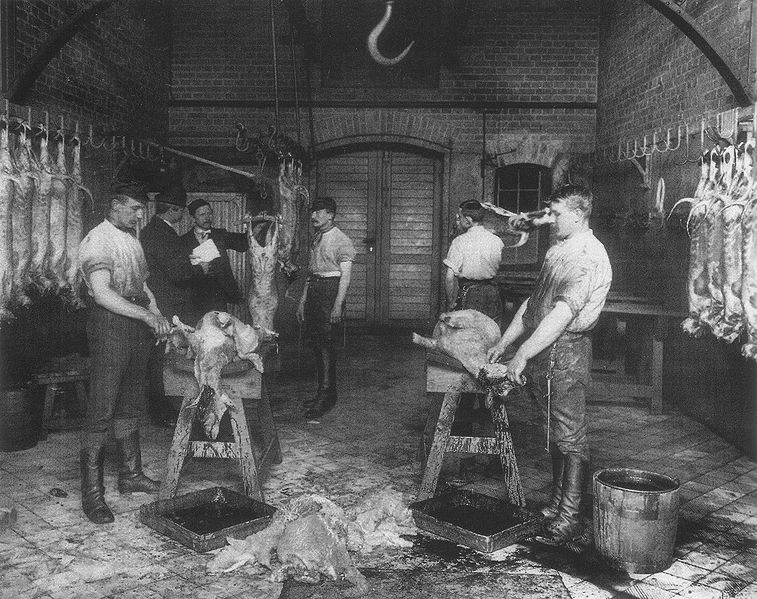 The Slaughterhouse Cases, a collection of three similar cases that were decided by the Supreme Court in 1873 was the first time the 14th amendment was interpreted by the Court. They ruled that a citizen's rights as protected by the Constitution were limited to what the Constitution spelled out and did not include rights given by many individual states. So in the cases here, where a variety of slaughterhouses contested the right of their states to create a business monopoly, the Court ruled that it was not unconstitutional for the states in question to do so.